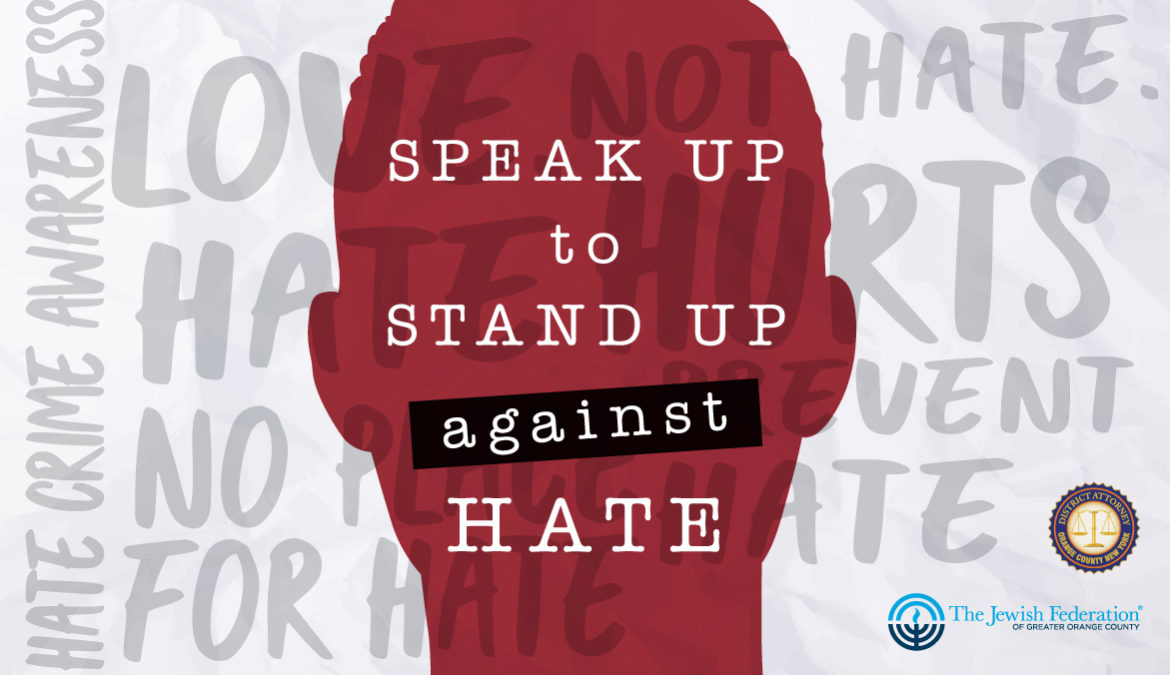 In September of 2018, Orange County District Attorney David M. Hoovler, in cooperation with The Jewish Federation of Greater Orange County, announced the launch of Orange County’s first Hate Crime Awareness Initiative. The campaign aims to educate the public about the growing issue of hate speech and hate crimes.

The full “Speak Up to Stand Up Against Hate” campaign includes printed educational pamphlets, posters, partnerships with local school districts and municipalities, and billboards. In addition, a training session was developed for law enforcement to teach topics such as preserving evidence at hate crime scenes, and terminology that is frequently used during anti-Semitic and related hate crimes.

Orange County has also designated Robert Conflitti, a senior prosecutor, to oversee the prosecution of all hate crimes.

The Orange County District Attorney’s office now offers a hate crime hotline, which can be reached at: (800) 378-1411.

The mission of “Speak Up to Stand Up Against Hate” is to encourage the local community to educate themselves and their families on hate speech and hate crimes, to understand examples of such crimes, being away of the effects bias can have on a local community, and how to prevent hate speech and prejudice, resulting in a more accepting community.

What is a Hate Crime?

Hate crimes are behaviors which constitute an expression of hostility against the person or property of another because of the targeted persons race, religion, sexual orientation, ethnicity, national origin, gender, age, or disability.

Effects of Hate Crimes on Victims:

BE UNCOMFORTABLE – Be an active participant in the world around you by taking notice of behavior or action you feel is wrong, harmful, or hateful

BE BETTER – Don’t respond to hate with more hate

SUPPORT TARGETS – If you witness someone who is a victim of prejudice, offer them support

BE A ROLE MODEL – Be mindful to use your words to make a positive difference, rather than a negative one

The first step in preventing more extreme hatred in the future is to teach children that even the most subtle forms of hate are wrong. As adults and as parents we must set the proper example for our kids. Be aware of how you address and interact with people of different races or ethnicities, treat everyone with respect, and be sure to set the right example.

If those around you are participating in hateful speech or actions, ask them to stop. If they don’t stop, explain to your child the fault in the behavior so they understand it is wrong.

We all must do our part to end hate speech and hate crimes.

To learn more about hate speech and hate crimes, download the “Speak Up to Stand Up Against Hate” pamphlet HERE.

Citizens may anonymously report hate crimes to the District Attorney’s Crime Hotline at (800) 378-1411.