Prior to becoming District Attorney, David M. Hoovler was a partner in the Chester based firm of Ostrer & Hoovler PC., where he specialized in criminal defense and municipal law.

In addition to the attention he has given his legal career, District Attorney Hoovler has been active in youth organizations, local government, and community organizations.

District Attorney Hoovler has been a speaker at the annual Association of Towns of the State of New York Winter Municipal Training Conference on various subjects such as emergency preparedness, emergency management, and FEMA reimbursement. He is a graduate and Hall of Fame inductee of Leadership Orange, and has continued his involvement by helping young leaders understand the role and impact that government has on their communities. He is also an adjunct professor at SUNY Orange, where he teaches Constitutional Law and Criminal Justice.

District Attorney Hoovler resides in the Town of Deerpark with his wife and three children. 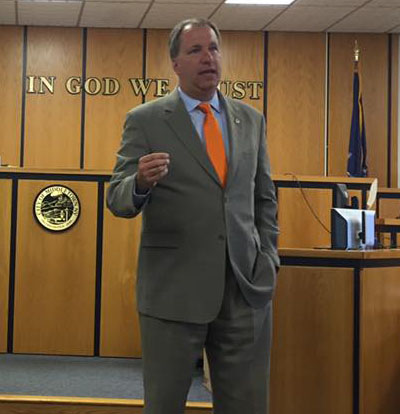